One of interesting types of dZi beads are the leopard beads. They are also called dZi beads in “leopard skin”.

There are several types of them but the most expensive and popular are the items of black and yellow color with deep relief, wide holes and prominent resemblance of antiquity. Nowadays they hardly can be found, their collection is almost run out. In internet auctions you can see such items at the price from 10 to 100 000 USD.

Identical black and yellow bead in my private collection. 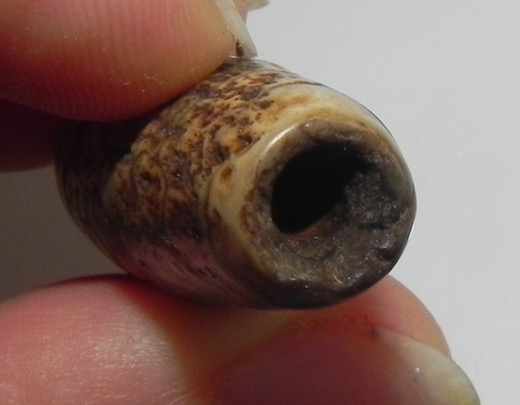 Besides black and yellow beads there are similar grey and white ones. They have less value but they are in demand too. These are the beads in “snow leopard skin”.

The good items with age can be attracted at the fewer prices than the black and yellow ones – from 100 to 1000 USD depending on the type and the age.

Although it is not known for certain how the mysterious leopard series appeared, some legends about them exist anyway. One of them was told to me in South China. 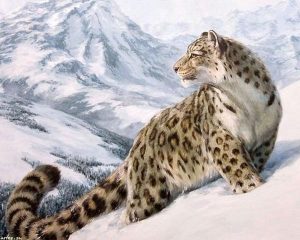 This legend is about a wanderer, to whom a snow slide blocked the way, and he lost. Being exhausted he started losing hope for rescuing and prayed for Higher Forces to help him. He was ready to drop as he heard a rustle, slightly opened his eyes and saw a silhouette of a snow leopard which appeared out of nowhere. Suddenly the wanderer felt powers and rose up. The snow leopard ran ahead. The man followed it, but it was impossible to get the animal. Soon it disappeared from view. 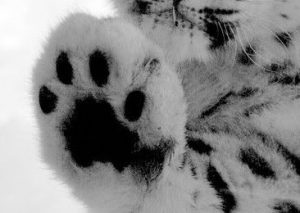 Suddenly the wanderer saw the paw prints of the snow leopard on the trail way. There was an interesting stone inside the paw print. It had a relief pattern which resembled the skin of the snow leopard. It looked like a spill of leopard grains painted the whole stone. The wanderer understood that this animal was sent to him by Higher Forces. He took the stone; it turned out to be unusual agate. The snow leopard paw print disappeared, but the trail way remained. Following this way the wanderer managed to come to a safe place.

Then the man shaped dZi beads out of the stone, the monks etched pictograms on them. They decided that this new type of amulets is the sending up from the Heaven…

Of course, this legend about the leopard beads is not the only one. This one seemed to me one of the most interesting.

It’s hard to say how long time ago the leopard dZi beads appeared, but for a long time only really old single-piece items have been in collections.

However, time zips along. More modern leopard beads and their imitations have appeared. Nevertheless, even they are rather popular among the dZi beads lovers. Very simple imitations can cost not too much, only several tens of dollars and more.

A long time ago I managed to bring serious and old items of the leopard beads. But today ancient black and yellow items are not available, they are a part of my private collection.

I offer simple leopard dZi beads to collectors with pleasure.

Yet even black and white real leopard beads are hardly to be found very soon, and the market will be filled with cheap imitations.

Seed beads made of agate – imitation of “leopard skin”.