Once upon a time they were living beings, which later fossilized…

I suppose you heard many times several Chinese legends of dZi beads origination. For example, the legend that Gods threw the beads onto the earth and people found them. Or another legend, that there were meteorites from the space, or maybe the insects or fossilized creatures, which froze in the ancient drifting Tethys Sea in Mesozoic Age. There also were many other versions.

Retelling these legends many people do not think that they are not unreal. Appearance of first dZi beads indicates that the ancient stories are true.

I am going to tell you about the Dzi beads which as per the legend were the living beings of mystic drifting Tethys Sea and then fossilized. People who afterwards found such pieces of stones with the frozen shells (with distinct round form of eye) noticed that these stones brought luck. The interesting fact that the number of eyes was indicative of the particular quantity of the attracted positive energy (this is the investigation of peoples who initially used such talismans). 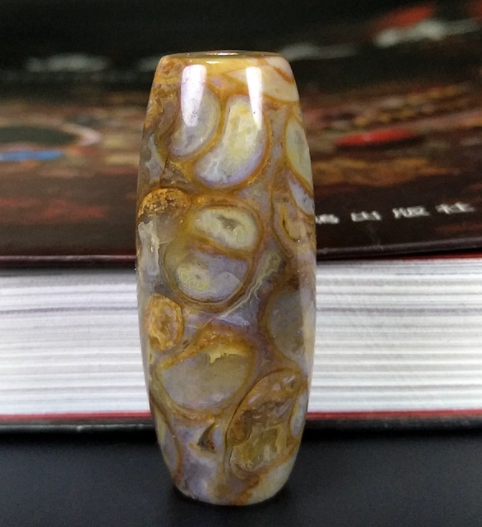 I’d like to remind that this is just one type of dZi beads! Don’t forget about the traditional dZi beads made of agate with etching.

I’d like to say that the name of Tethys-dZi does not exist. I introduced this classification on purpose so that it could be more suitable to distinguish this type of dZi beads, which refers to fossils. Precisely these beads were found on the lands which as per the ancient legend were the bottom of mystic Tethys Sea.

What do such dZi beads look like? These are various fossils with “eyes”.

First of all, these are fossilized shellfishes, snails such as eft and cowrie and many other fossils of gastropods. Their shells froze in the form of eyes. The substitution of minerals, agate and chalcedony for calcite had been happening for centuries and millennia in earth’s womb.

The shell dZi beads still have a great success. History is of the essence. Since ancient times the fossilized porcelain snails in China had been used as money. They were called “precious snails”. Even when the shells were replaced with copper coins, in Yunnan cowries were taken as payment till the end of the nineteenth century. The ancient fossilized cowries are still considered to be powerful magic talisman not only the money amulet but also the amulet of love, trust, kindness, attraction of sympathy of surrounding people, the amulet from bad intentions and evil thoughts. Magicians and shamans confirm that the fossilized cowrie talismans display the strongest power in the period of full moon and new moon (the period when shellfishes left their shelters and lifted to the surface). In this period it is desirable to make devote wishes, to conduct the rituals with stones, to attach the additional talismans on them.

Now there are fossilized shell dZi beads, on which the pictograms are carved out. 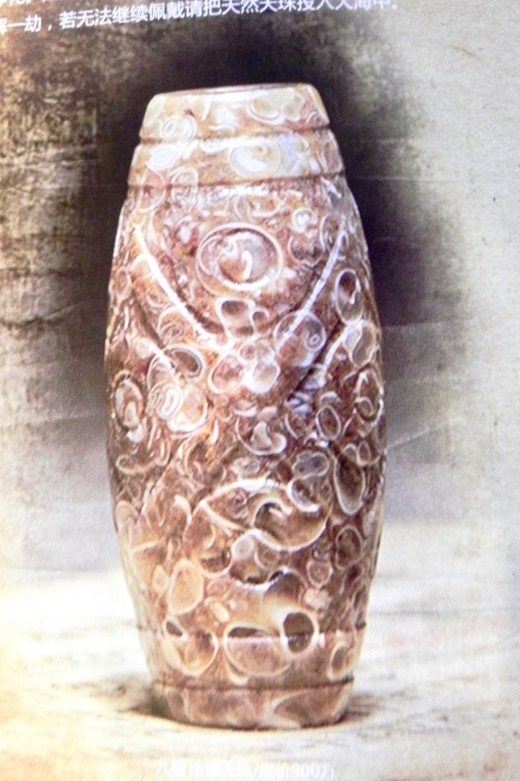 There is one more interesting type of the fossilized Tethys-dZi. These are dZi beads with relict slate “eyes”. Their stocks are hidden in the grounds of descendants of legendary Hazar – Genghis Khan’s brother.

Now I’m going to tell you about them.

The legends about magic natural beads with the fossilized creatures in the form of eye still exist though many centuries have passed. Several decades ago people thought that now there were no stocks of these beads. During many years only dZi beads with natural patterns of the “eye” agate were available. Only in historical records there were mentions about so-called “coin dZi of nine stone slate”. 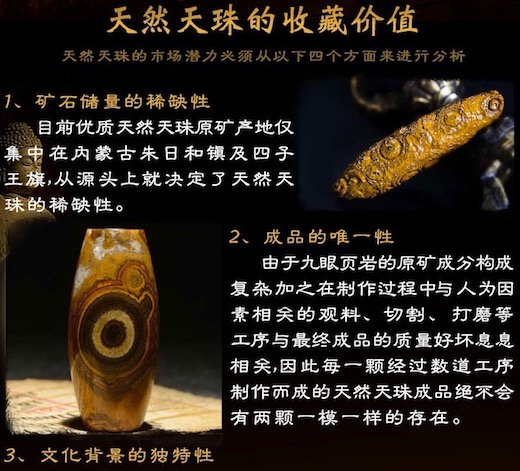 The Chinese suppose that in ancient times such beads became “open” to people after falling the meteorites which caused the deep shell holes in the ground. There were incredible stones with “alive eye” found. Maybe then the first legend about “the beads thrown by the Gods from Heavens” appeared.

It seemed that mysterious relict dZi beads of nine stone slate (they are sometimes called nine eye stones of nine ores) disappeared forever. Suddenly, the Gods became generous and again threw the mysterious minerals with “alive relict eyes” to people from the Heaven.

Siziwang  translated from the Chinese language means “Four princes” (four sons). Wulanchabu means “Red mountains”.. This is the territory of so-called Inner Mongolia (Autonomous district of China), located on the boundary with Mongolia in the northern part of China. 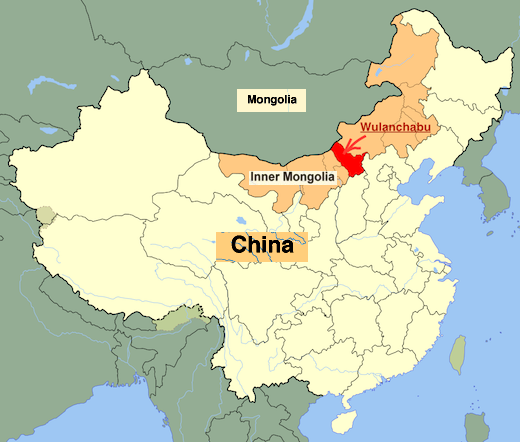 The origin of the banner name goes back generations. Erstwhile it was associated with the name of four Mongol brothers: Sengge (僧格), Suonuobu (索諾布), Emubu (鄂木布) and Yierzhamu (伊爾扎木), who were descendants of Hazar, a brother of Genghis Khan. They led their tribe in participating in the conquest of the local lands by Qing dynasty of Ming. In recognition of their service the Qing court gave them the titles of princes in 1649 and settled their tribe in the territory of modern Siziwang Banner, which got the name of four princes. The title was hereditary and passed through the descendants until communist China abolished all hereditary titles in 1949. The last prince Sudanamuchaogeji (蘇達那木朝格吉) died as a private citizen in 1957. The sculpture of four princes is still located in the center of Siziwang Banner. 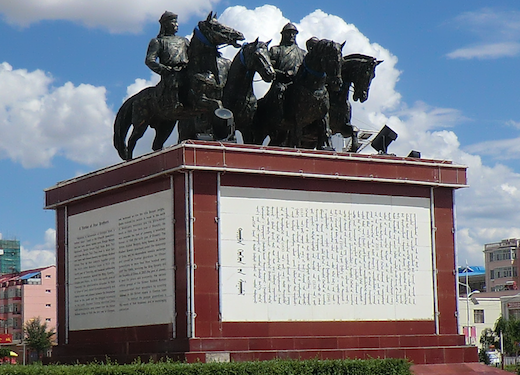 Now, after the centuries have passed, the names of descendants of Hasar – a brother of Genghis Khan – sound familiar again. This is the place where the underground treasure of magic dZi beads with “alive eyes of nine stone slate”, concealed not by people but by nature, were found. Even slate mine was developed here. Nevertheless, the scientists confirm that one day the stocks will run out and the work will stop.

It is worth noting that some few coin Tethys-dZi can be found in the territory of the Gobi Desert in Inner Mongolia. To be honest the stones are simpler here. When grinding they don’t give such colors as the beads from the grounds of “four brothers” do. That is why more often they are not ground, they are left as they are – with not ground “eyes”. Such untreated stones are called “gobi-agate bonsai”. They protect from evil spirits and bad energy. 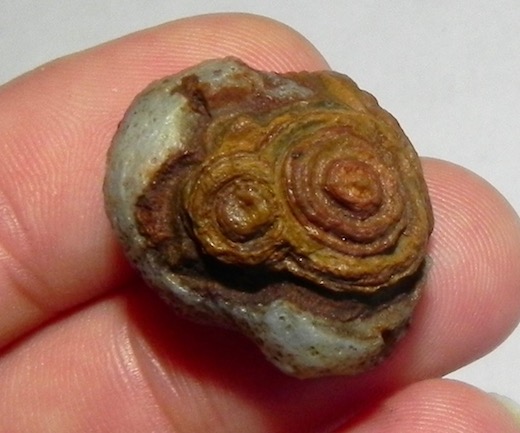 Below is the bracelet made of gobi-agate bonsai. 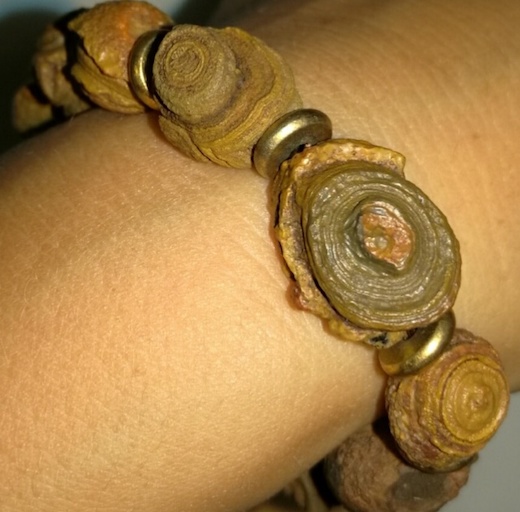 You can read more about gobi-agate here.

This stone had been formed in earth’s womb for centuries. The scientists consider believe that it has a special field, which can have a health effect on a man.

The stone treatment is a very difficult and delicate process. It is important not to damage the pattern and the “eyes”. That is why the ground beads usually have non-perfect jagged surface.

The most expensive beads are the beads with ideal smooth “eyes” with natural pattern similar to pictogram, and of course, in which the pattern is depicted by nature, these are unpressed beads. One more factor is magnetic field strength. The beads cost depends on it. That is why the price of the end product can fluctuate from 15 $ to 1 million $.

Look at these interesting beads, which I was lucky to bring from my recent trip.

The natural pattern in “coin bead of nine stone slate” is the natural cameo “Lucky” inside the stone (see the picture below). Can you see a woman silhouette in the middle of dZi bead? Nature has created this beauty – it is incredible! You can see really invaluable item. Now this is my private bead. 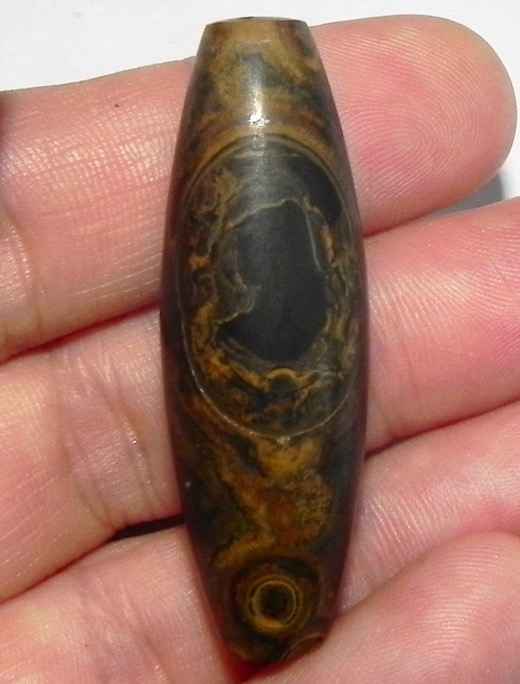 This is natural Garuda Bird, flying on the background of sun disk. This is not the crack. These are the formed little lines of slate pattern. 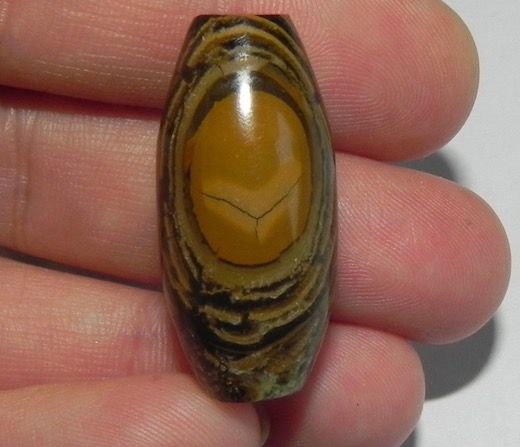 Buddha’s heart and 1 “eye” – see the picture below. This is a natural pattern! Don’t think that this pattern is manually etched. 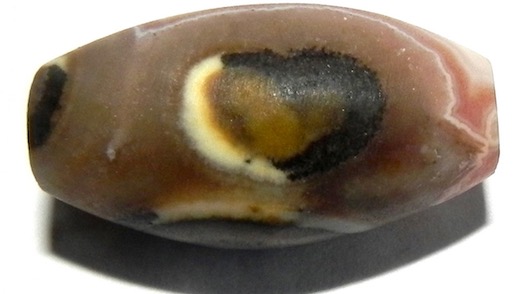 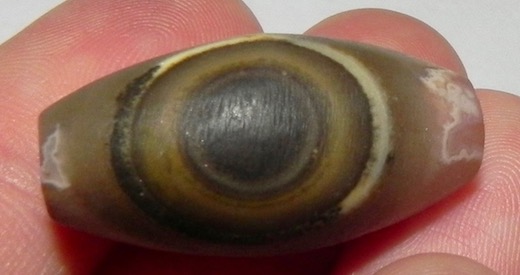 Money binding hook – also is the natural pattern – see the picture below. 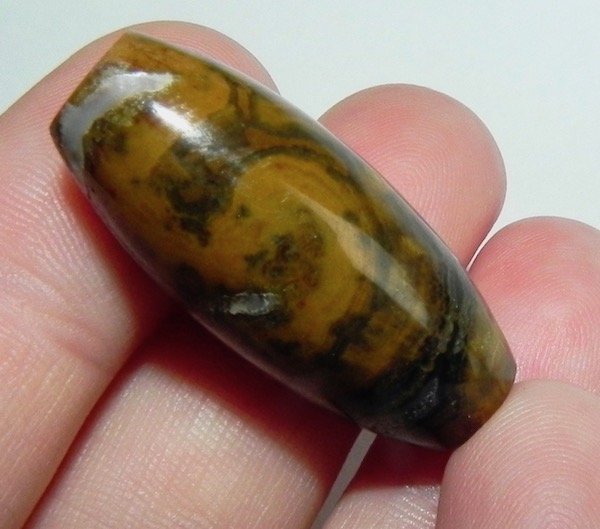 This is one more interesting item of my private collection. Head of Snake/Dragon.

Below is the natural pattern of 2 eyes “Dragon Eyes” in the coin dZi bead. 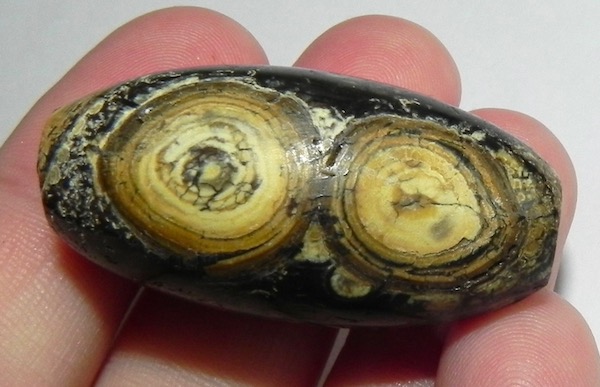 I also would like to present 3 eyes dZi bead – natural pattern, the “eyes” are not pressed. 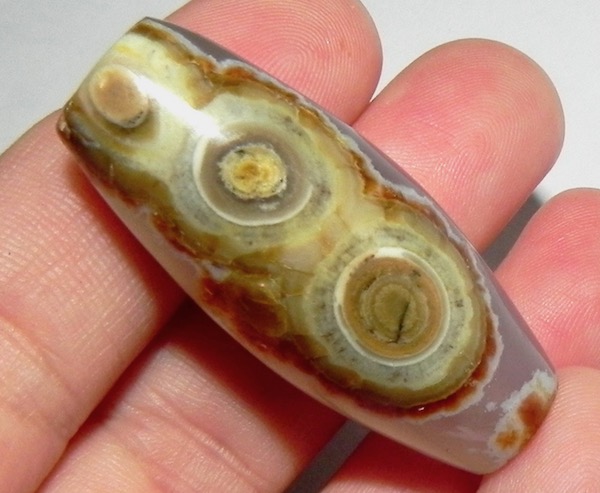 These are 2 eyes in the form of eight. This bead is not pressed, this is a natural pattern in the stone. 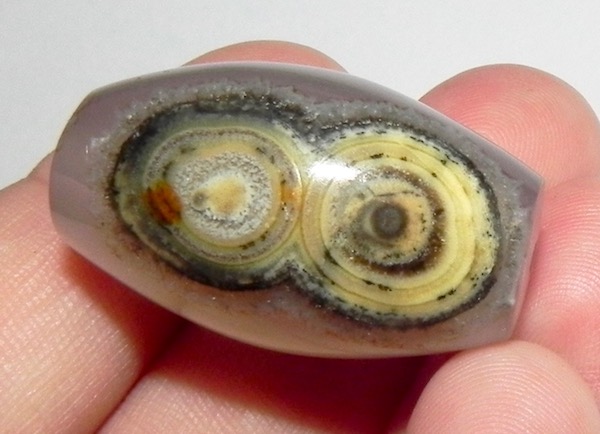 By the way, now foreign online auctions are full of pressed fakes made of agate, which copy natural coin Tethys-dZi. They are not expensive, but the “eyes” are artificially fixed in them. The “eyes” are carved out in different beads. Then crystal agate (sometimes brown) is taken and the recesses are drilled out in it. Then the “eyes” (any necessary number), carved out of other stones, are put into these recesses. Then everything is pressed together. It is not difficult to distinguish such beads. The “eyes” in them are not combined with the stone. They look like they are adhered (if you see attentively). In dZi beads with natural slate “eyes” the “eyes” are combined with the stone. They seem to grow out of it.

Look at the picture below. This is a fake.

Here you can see – the “eyes” look like they are adhered. This is a pressed item.

Now look at the picture below. You can see how the natural “eye” in a real natural coin dZi bead looks as if it is growing out of chalcedony. 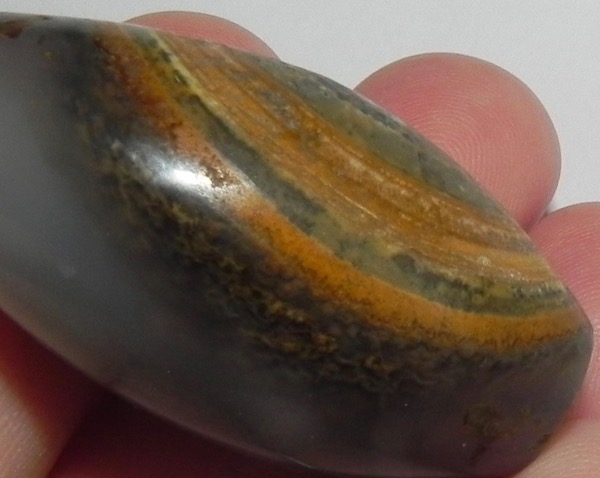 All the stone structure is combined inside. 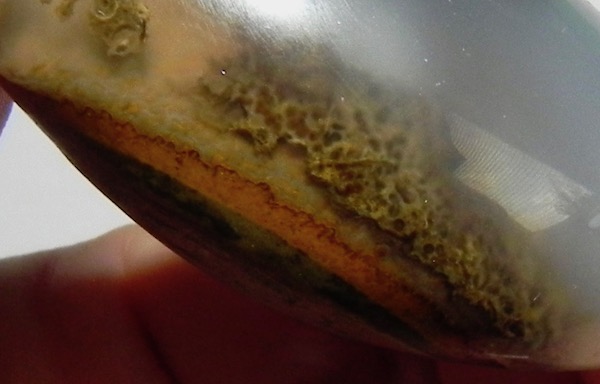 Of course, natural beads with natural “eyes” are very expensive. The pressed fake – is not expensive. It is necessary to know when choosing the coin dZi beads.

In my following articles I will tell you about meteorite dZi beads and their types.