“Artefactor” is of course a conventional, symbolic name. This is a 3D construction, made for ritual practices and energizing any amulets (not only dZi beads). It has a magnetic field. The construction is “sealed” with sign of double Vajra at the bottom.

Up to now most of us have energized our amulets using different extemporary ways, and this is actually normal and can be done till now. However, the ritual part of the object activation is very important for many artifact lovers and people who work with energies. That is the ritual itself and concomitant ritual objects of altar. When I travelled over Eastern Asia I met a lot of similar constructions. But the most interesting of them are handmade devices, which the monks, the representatives of Taoist practices of East Asian variants of geomancy or, for example, descendants of ancient lineage of bon po religion use… Each of them has the secrets. In most practices cosmic energy, power of Five elements and forces of nature are used.

The “Artefactor”, which I propose to use in my practices for energizing the beads, combines the principles of ancient ritual practices. It also can be used for generating the steps to the desired goal and for solving particular tasks in ritual meditative practices.

In the basis of this construction lies Sri Yantra. The sacral pattern is independent either from religions or from person convictions. Its image is made by woodcarving. Sri Yantra is anciently considered to be a sacral geometric print image of Cosmic energy. Nobody knows how and why this pattern works and how people know about it. Nevertheless, it works. That’s exactly why Sri Yantra is used in many meditative practices. Sri Yantra helps to seek the truth and ways, makes dreams come true. The monks often use Sri Yantras in their rituals, when they need to accumulate the energy in a powerful flow.

3D Sri Yantras are often used as the source of positive energy. Moreover, they work both inside and outside. There are secret practices, in which large 3D Sri Yantra pyramids are used. There is room for the person inside of such pyramids.

The object or the living being placed in Sri Yantra center shall get the particular cosmic energy and power. At the same time Sri Yantra makes positive impact on the room, in which it is and on those who is just contemplating it. People think so in Eastern Asia. That’s why the provided Sri Yantra artefactor can be used for different tasks, meditative practices and just for contemplating. Here is the same principle as with mandalas.

There is 3D pattern with high boundaries, which have a magnetic field, inside of Sri Yantra artefactor.

It can be the field inside of circle (see the picture below). 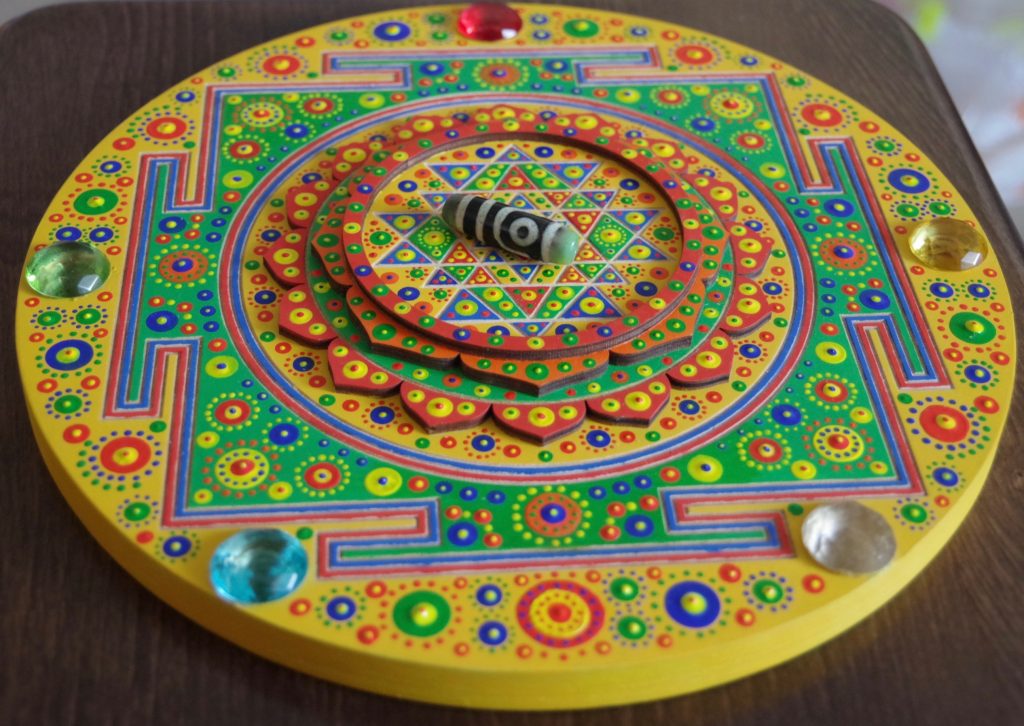 Or it can be the field in a diamond (the example is below). 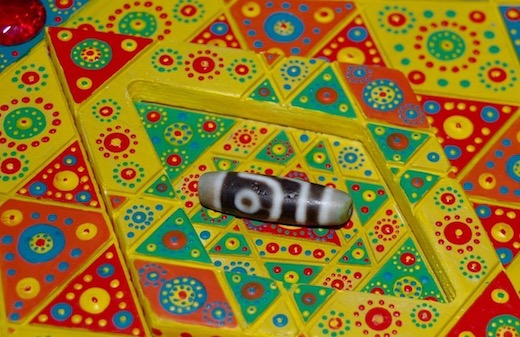 The point is that inside of Sri Yantra artefactor there is 3D center with powerful magnetic field, which so to speak collects energy in the center of Cosmic pattern. DZi-bead or any other object is placed in this center during the ritual energizing. The magnetic field itself is located not chaotically. It is created with geometrically sequential location of the points. The magnetic aura is perceptible (if you bring the compass to Sri Yantra compass, its pointer will decline). 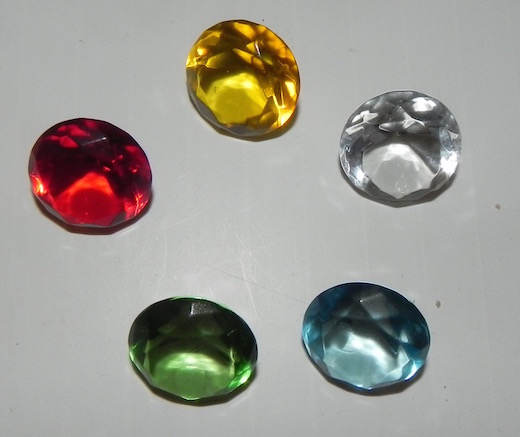 Sri Yantra magic power, intensified by magnetic field and activated by five elements, creates a powerful source of energy. Thus, we have simple but at the same time energetically-active construction, using which you can perform meditative rituals and energize your amulets.

In one of my materials I will tell you how to use Sri Yantra artefactor best of all when working with amulets.

Of course, the artefactor with full point-geometric painting has the most energetic power. This painting is applied to the assembled blank of 3D Sri Yantra with magnetic field to the strains of mantras. This is very long and hard work (try and you will understand how much time it takes). BUT… It should be noted that hand painting has special power in this case. The handmade and rough painting is much better than stamped item.

My Sri Yantra artefactor (mini) © (the example is below) 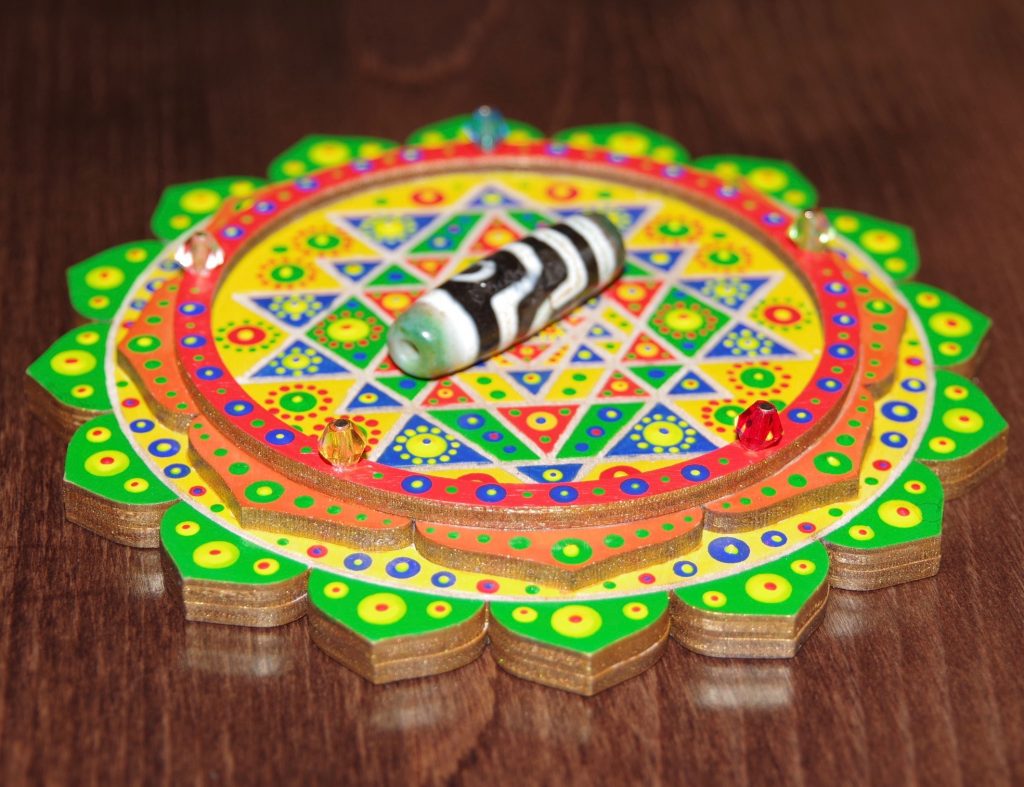 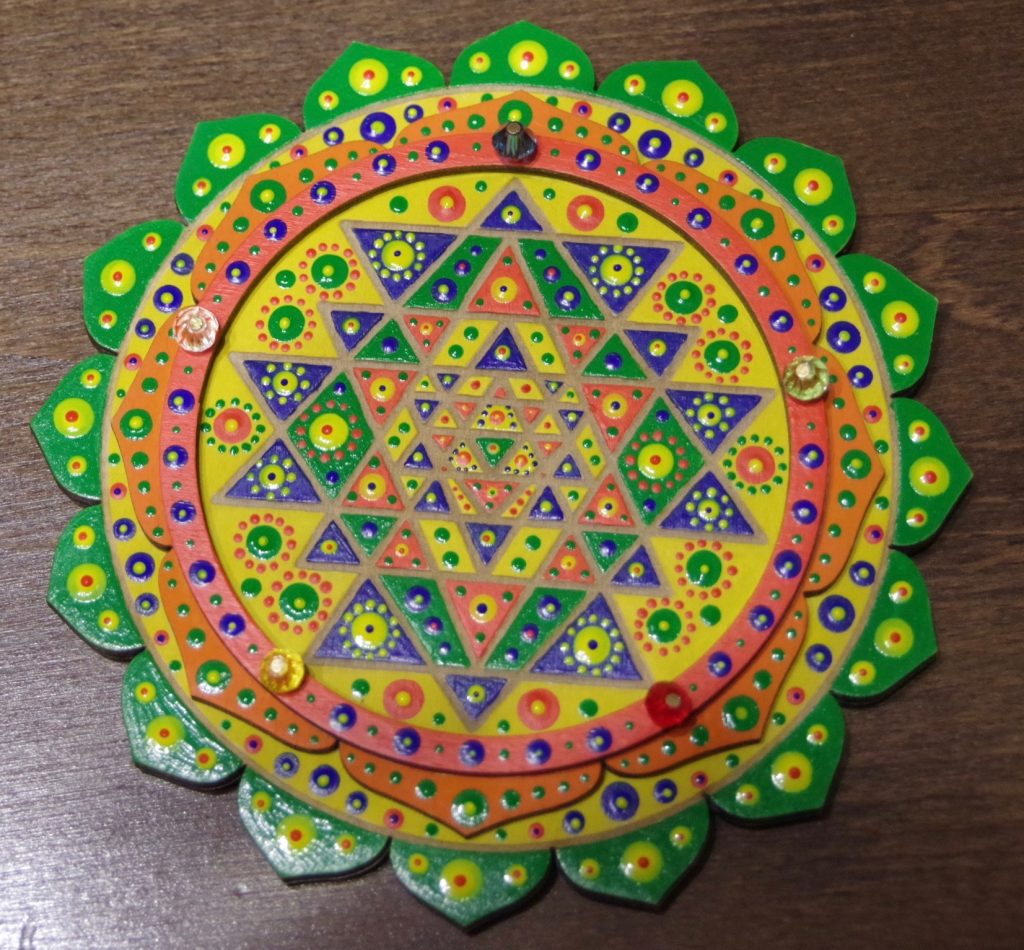 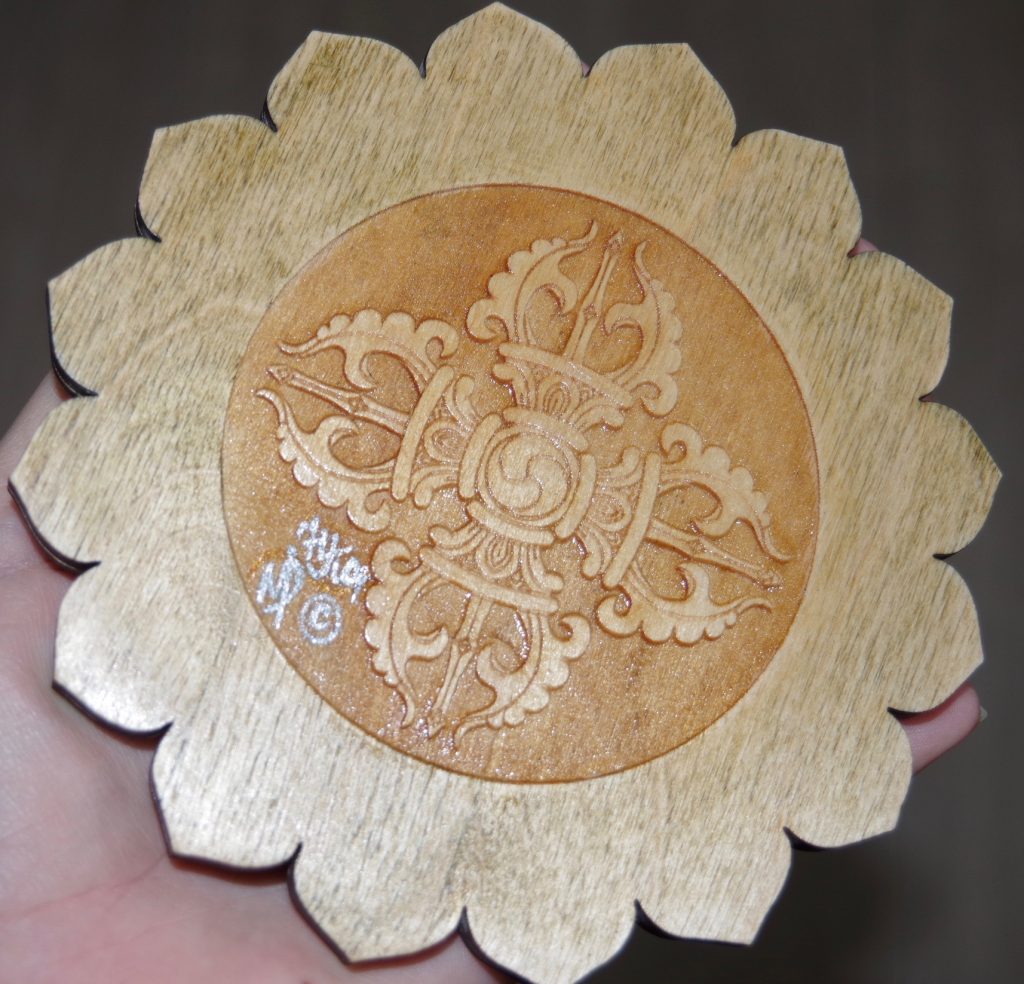 And my Sri Yantra artefactor big © (the example is below) 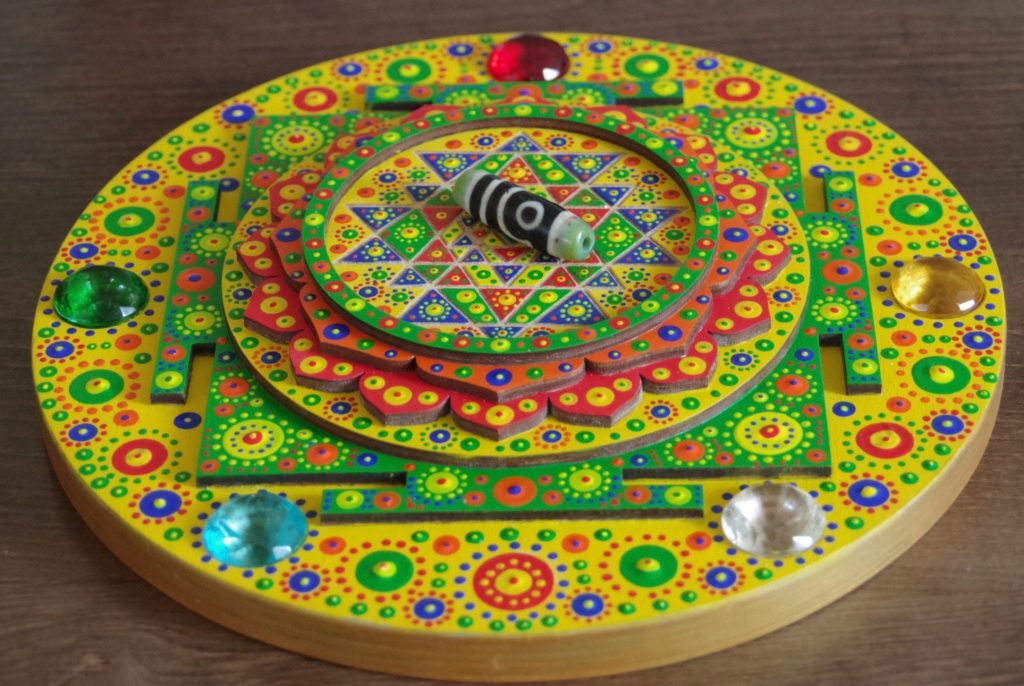 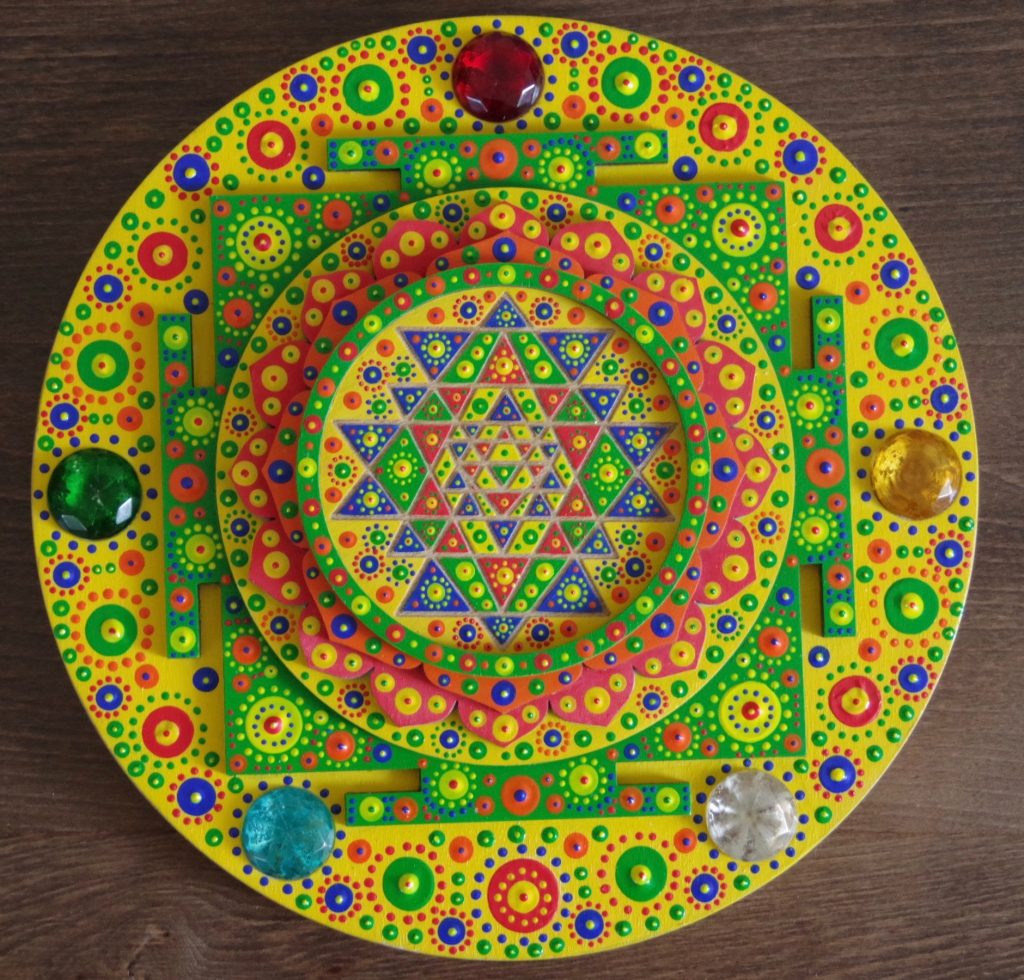 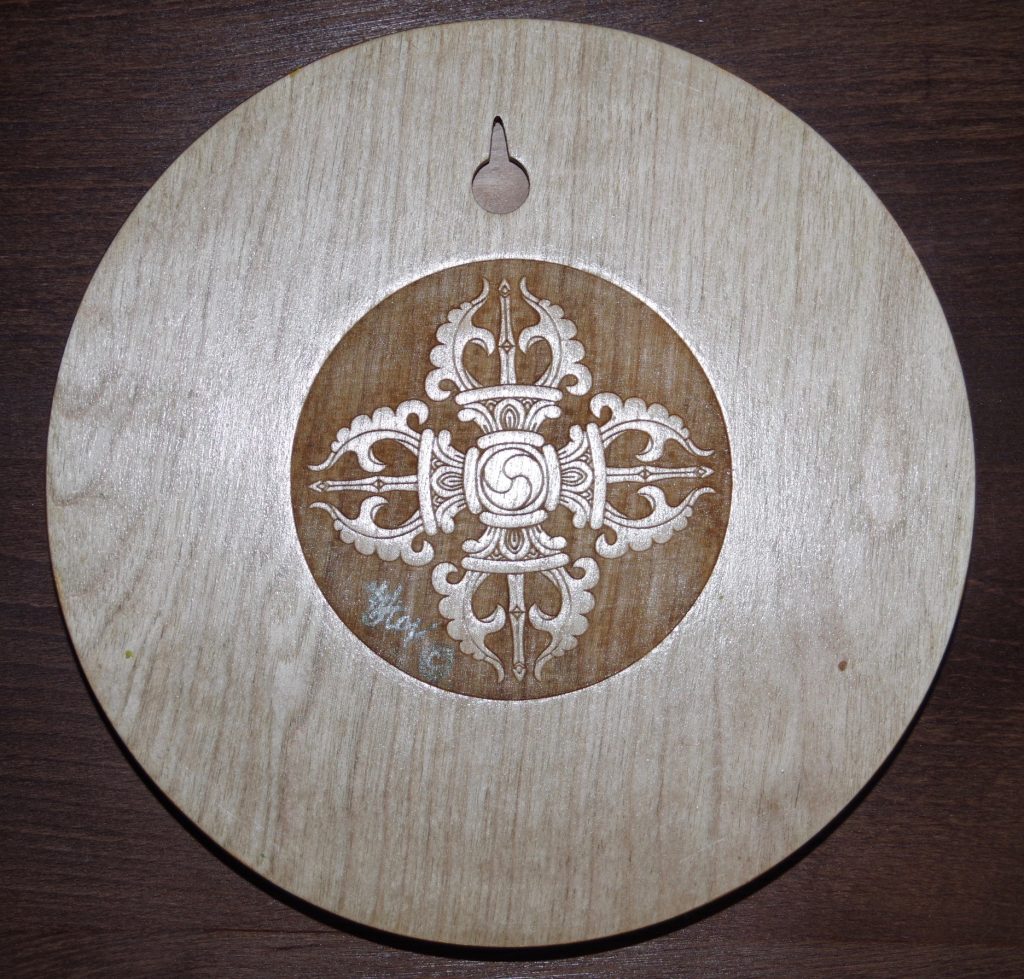 (more in the following material)