If you think that the word “meteorite” means the amulet made of meteorite iron (which is got from the meteorite fallen onto the ground), you are mistaken. As there are a lot of types of “celestial” things (in the Tibetans’ opinion), for us, Europeans, it is very difficult to enter into everything. That is why, prior to attract “meteorite” amulets, it is worth knowing more about them, in order to distinguish them and understand the difference in price range.

The Tibetans call “meteorite” material and articles made of “celestial stone/iron” not only the things made of the meteorite fallen onto the ground. These also are minerals, “sprinkled with celestial body sprays”, ores, which so to say absorbed meteorite particles. This is also black axe stone as well as the minerals twisted with strands of magnetic ore and some other materials, including even Sybin pumice stone. In order to understand what we are speaking about, what the difference is, what the historical value of each type is, we will try to give the information about the most often met amulets which in East Asia are called the meteorite amulets.

We will begin, of course, with the real meteorites. 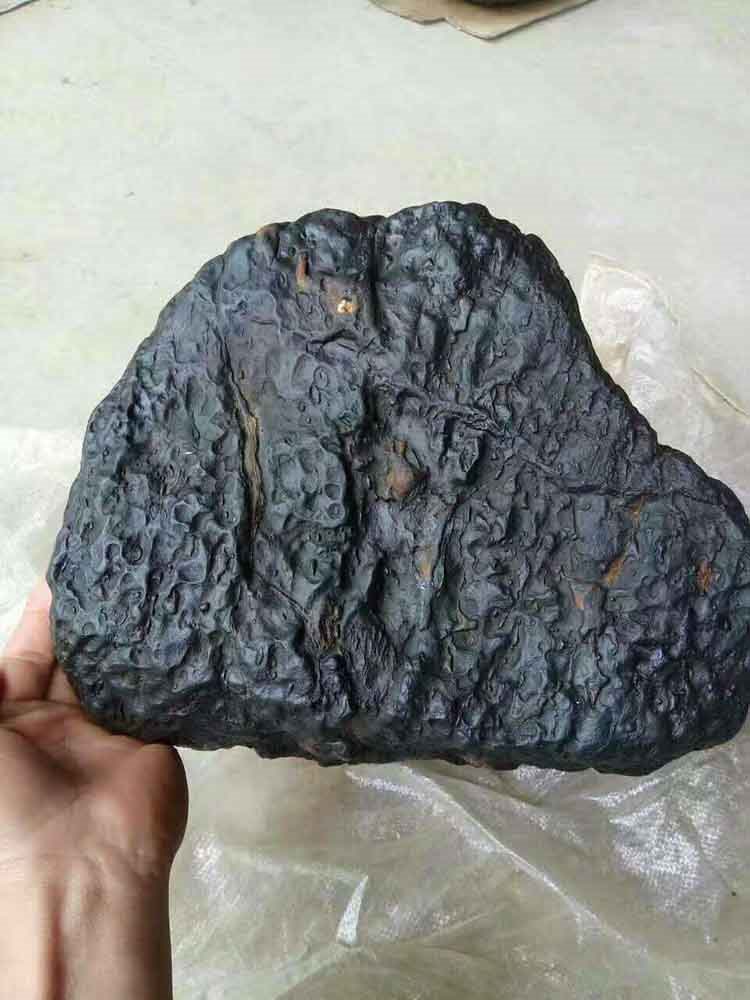 With their types, to be correct. In order to understand that real meteorite material can be different, it is worth knowing what kinds of meteorites there exist.

There can be iron meteorites (earlier they were called siderites). They consist of iron-nickel alloy. About 6% of the meteorites fallen onto the ground are such meteorites. The real meteorite iron, about which we will speak later, is got from them.

Then follow iron-stone and iron-silicate meteorites. We can speak long about them. These are pallasites and mesosiderites, but there is no use of these scientific names now. It is enough just to understand that it is iron and stone alloy.

And finally, the most popular are the stone meteorites, most of them are chondrites. They are the cheapest of all. Nevertheless, they are interesting too. Their composition is the same as the Sun’s one, excepting that there are no light gases such as hydrogen and helium. I’d like to mention achondrites. They are considered to be the pieces of the planet bodies. There are also carbonic meteorites.

I can go on and on speaking about the meeteorites. As our project is not scientific, the superficial knowledge is enough.

I also can add that the pure iron meteorite pieces and the articles made of them have significant magnetic properties. If you bring them close to the compass, its needle will deflect at once.

Iron-stone meteorites and the meteorite articles also can have similar properties but they are feebly marked.

However the stone meteorites do not show their “magnetic capabilities” in such a manner, though sometimes, they can be felt if there are grains of metal in the stone.

How often do the meteorites fall onto the ground?

The scientists are sure that tens of thousands of celestial bodies with total mass of more than 21 tons fall onto the ground every year. Nineteen thousand of them are small – with weight of less than 1 kg. More than 800 objects are heavy, they are more than 10 kg.

In China the most remarkable falling of meteorite was in Jilin province in 1976 (it weighed 4 tons). The most often meteorite gusts are known in Inner Mongolia region of North China (where the descendants of Hasar, Genghis Khan’s brother, governed). This mysterious region is known to you by the article about coin Tethys-dZi beads (if you haven’t read it, you can do it here)…

The so-called Hongshan culture comes from here (archeological Neolithic culture of Northeast China which includes making of the meteorite amulets and other meteorite articles).

In ancient times a lot of meteorites “visited” Tibet and the Himalayas (the picture below depicts the Tibetans who is picking up the stones after meteorite rain). Here also the ritual objects, vajras and phurbas as well as ancient Tibetan swords were made of real meteorite iron. Now we are going to speak about it… 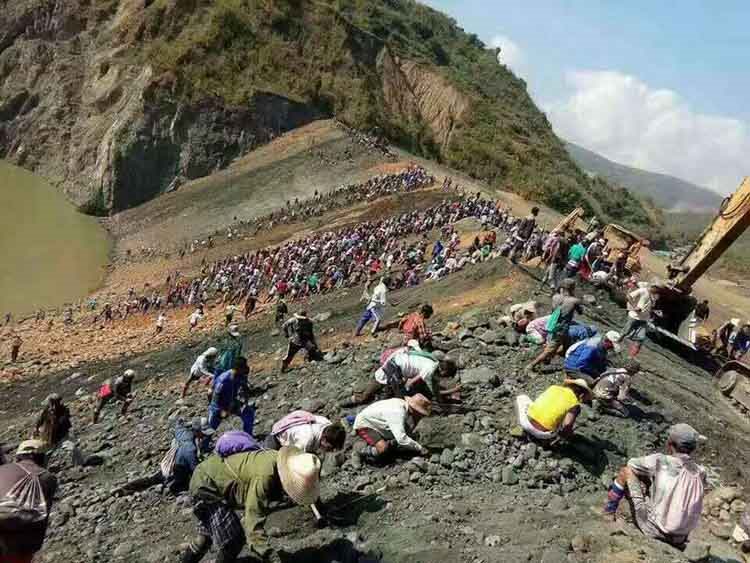 Historically, the real meteorite iron is nothing more than the material of the fallen iron meteorites, which in East Asia were considered to be magic stones thrown by the Gods from Heavens.

BUT…Even in ancient times some other materials were also referred to thokcha. The Tibetans decided that thokcha could be formed both by natural and magic way when the lightning stroke the ground. It means that we speak about not only the meteorites fallen onto the ground.

However, we are talking about the meteorite iron of the iron meteorite fallen from the sky.

Robust weapon, unique musical instruments, ritual things as well as amulets were made of such material. 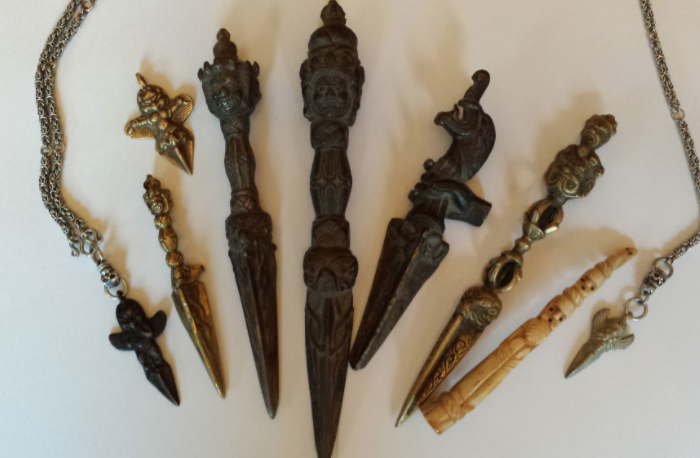 The meteorite iron is included in ancient Tibetan resonance bowls which have peculiar phonation.

Any objects made of real thokcha are considered to have magical and protective power which can be comparable with the power of Tibetan dZi beads. 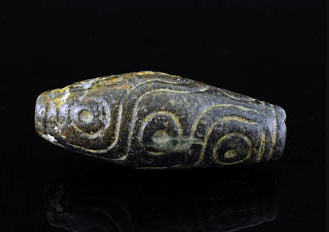 If dZi beads are made of meteorite iron the power shall become doubled.

Thokcha can be divided into two groups, the first group includes the objects of pre-Buddhist period (about from 1000 BC to 900 AD), the second group refers to Buddhist period (after 7 century AD). The early thokcha are connected with Tibetan Zhangzhung culture, which has direct relation to Bonpo religion.

The latest thokcha on purpose were made of copper alloy taken from the place of meteorites falling, lightning strikes and other abnormalities. People relied on the fact that the surface here absorbed the part of the Heaven energy. So you should take into consideration that present-day thokcha is not always real meteorite iron of the real iron meteorite!

Some people state that black axe stone is a merger of axe stone and magnetic ore. And it is not all- black. Besides, there are silicates and calcium in impurities of such stone. It is very doubtful to refer this merger to axe stone… But it is not the case. The point is that the stones that we see on the market do not include even a small part of real axe stone. If it is not a pressed axe stone powder with black dye.

We won’t speak about all the types which are hidden under the name of “meteorite amulet of black axe stone”. Let’s stop at the most popular one, which occupies the world market nowadays.

This is so to say “sybin pumice” or “sibin pumice”. It does not include axe stone at all… This nickname appeared later and this is rather a household name, for example, just as oil is called “black gold”, so the Siberian pumice is called “black axe stone”.

“What have meteorites to do with it?” – you thought. I can explain. 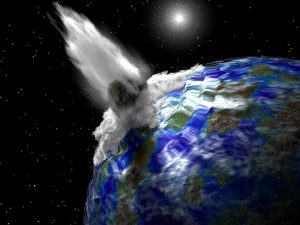 According to ancient manuscripts many million years ago a giant meteorite fell on the lands of Tibet. As a result of its collision with the earth there was a powerful explosion. High temperature and a great pressure caused the merger of meteorite substance and the rocks which had melt and formed such kind of stone which is now called “sibin pumice”. Sometimes it is called Byanshi stone (after the name of deposits or the meteorite fallen later than million years ago in Tibet). What is true or false is difficult to say now. One thing is clear: sibin pumice is neither the meteorite nor the meteorite iron. It is also not the axe stone. Its price is rather low, because it consists of more than 90% of calcite.

How does it differ from the simple pumice? Why do people value it? Compared to other similar stones, sibin pumice contains more than 30 microelements, most of which really have a positive effect on the organism.

Shaolin monks state that as the result of space stone interference the rock got new properties and became a medical mineral. These black stones were widely used in Shaolin Monastery. Using them people eliminated pain, massaged, eliminated edemas and relaxed.

Since then the acupunctural stone has become very popular. It is still used for rejuvenating Guasha massage. 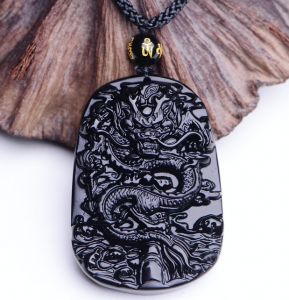 Besides, this stone became a material for many Buddhist amulets, including dZi beads. That is why you can often see in the internet not expensive dZi beads, talicmans, bracelets and other articles with the name of “meteorite talisman of black axe stone”…

Of course, you can attract them too; they also have a particular popularity, have medical effect on the organism and are considered to be acupunctural mineral. However, don’t forget that the price of such stone is rather low. It can’t be comparable with meteorite iron, meteorite materials and real integral pure axe stone.

In the end I would like to add that among “meteorite amulets” (including “meteorite dZi beads”) there are up-to-date articles at a reasonable price, which have a relation to the celestial stones fallen from the Heaven. As the masters from the Celestial Empire state, these can be the rocks containing the particles (or “sprays” as they state) of the celestial body, which got onto them as a result of meteorite strikes and explosions. The interesting fact is that these can be both metal and stone rocks…

The price depends not only on the material but also on the age and collectibility of the item.

Many meteorite dZi beads have magnetic properties. No, they don’t magnetize the objects. Nevertheless, they can hold a small magnetic disk. 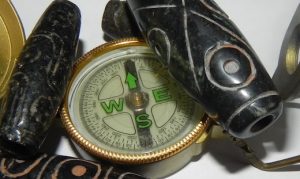 Mainly it concerns the iron beads or the iron-stone meteorite beads. If the beads are made of stone, it hardly will have a discernible magnetic property, which will be able to effect the compass needle. But it doesn’t mean that this bead is worse. The stone is not the iron, this is an explanation. It may have a magnetic property, but in order to determine it the more sensing instruments are required.

By the way, due to powerful “celestial” properties the meteorite beads are not recommended to wear continuously. They can cause indisposition as their energy is rather strong. However, the temporary contact with such bead can promote recovery, normalization of energy balance in a human body. People in East Asia believe it. This fact is confirmed by some men to whom I brought meteorite dZi beads. They assure that they use the talismans to relax and to eliminate headaches.

I don’t know if the meteorite dZi beads effect each person in such a manner or not. Nevertheless, many people are pleased to have such mystic talisman with the energy of Heaven in their collection. And you? Would you like to have such talisman?